The Original Map release from Games Workshop has been studied numerous times. Perhaps there is an area everyone else missed! Care to roll the dice? 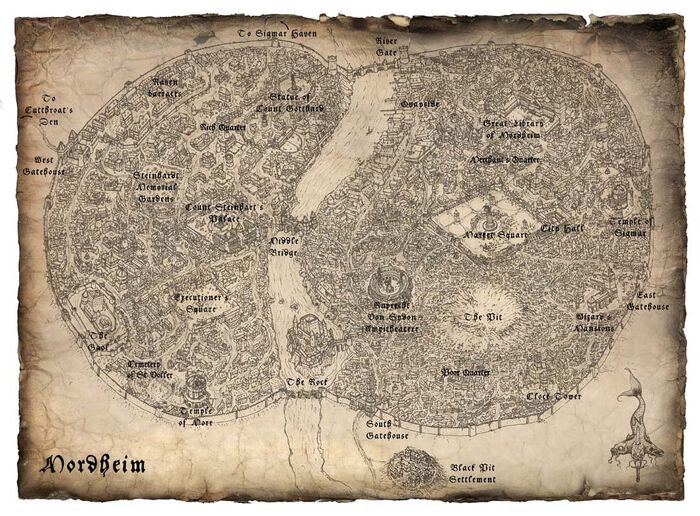 How to evolve into a campaign

After a huge number of games of Mordheim, there comes a time when progression of the warbands themselves becomes less appealing. Tournaments are the first way to augment the progression into something more.

Even if only two people are playing, they can have 4 warbands each and see which one of their warbands progress the furthest into the tournament. For 4 people, each can have 2 warbands. This not only provides enough warbands for the tournament but also gives each person multiple chances to progress at least one warband to the end.

After a few tournaments, even more progression can be had in the form of a campaign.

A campaign is a series of tournament stages with an end goal at each stage. Which ever warband (or multiple warbands) achieves the goal "wins" that stage of the tournament. The tournament then continues until the end stage.

Depending on how the campaign is set up, warbands that did not win a stage can still participate in the overall campaign, usually weeding out losers more and more as the campaign progresses.

After a few campaigns, prizes can be introduced (such as a +1 str weapon) for each stage of the campaign. This can progress in the next campaign, giving stronger prizes for winning a stage and minor prizes along the way, until an ultimate campaign of overpowered prizes are handed out like candy.

Overpowered prizes can include multiple one use items such as spell scrolls and overpowered (+2 str) weapons and armour.

One important aspect of a campaign can include NP (game master controlled) events that reflect the story-line of the particular campaign stage. This can break up the ridged form of players against players. From retrieving an item needed to move onto the next campaign to side missions that gain access to items that boost a warbands advancement.

Side missions can also be used to help out warbands that become unrecoverable too quickly in the campaign, making a smoother ride for the overall campaign. This is preferred to just "handing out" charity to a weaker warband for the sake of the campaign.

Its a bit tricky to give a challenge but not crush a warband with NP event. One way to help is to save "snapshots" of normal warbands as they progress, to be used later in this type of setting. This gives a NP warband real fighting experience, money gain and loss, injuries and equipment that reflect the play-style used with the warband as it progressed.

For ideas on NP events, see The Lore of Mordheim.

Retrieved from "https://mordheim-city-of-the-damned-archive.fandom.com/wiki/Maps_and_Campaigns?oldid=3282"
Community content is available under CC-BY-SA unless otherwise noted.